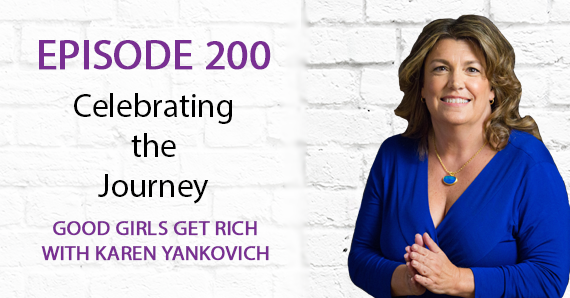 This week’s episode of Good Girls Get Rich is brought to you by Uplevel Media CEO and LinkedIn expert, Karen Yankovich. In this episode, Karen celebrates Episode 200 by reminiscing on our journey.

Our journey at She’s LinkedUp has been a wonderful journey of growth and change and helping create wealthy women of influence, and we can’t wait to celebrate the journey with you!

We want to hear your thoughts on this episode! Leave us a message on Speakpipe or email us at info@karenyankovich.com.

This episode is a milestone – it’s Episode 200! In this episode, Karen reflects back on the journey we’ve had at She’s LinkedUp. Where the program is today from where it was years ago is drastically different.

Throughout the journey, we’ve learned how to better serve and support our students. We wouldn’t be where we are today without you all, and we’re so thankful we’re able to serve you in this way!

Resources Mentioned in the Episode:

Help Us Spread the Word!

If this episode has taught you just one thing, I would love if you could head on over to Apple Podcasts and SUBSCRIBE TO THE SHOW! And if you’re moved to, kindly leave us a rating and review. Maybe you’ll get a shout out on the show!

Intro 0:05
Welcome to the good girls get rich podcast with your host, Karen Yankovich. This is where we embrace how good you are girl, stop being the best kept secret in town, learn how to use simple LinkedIn and social media strategies and make the big bucks.