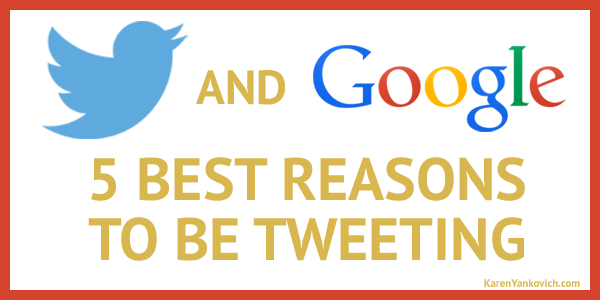 You know I’m a Twitter lover! Now I have even more reason to love this platform after the recent announcement of the Twitter and Google partnership has become public.

This deal gives Google access to the almost 9,000 tweets per second (yes that is a real stat) streaming through Twitter’s feed and Google is prepared to add these tweets to their search engine in real time. Meaning: you click ‘tweet’ AND boom it’s searchable outside of Twitter-land in a matter of seconds.

What this really means is your social media content will start to play a much bigger role in your SEO. Having a Twitter feed that is fresh, updated often (click here to read my post on how often I recommend), and foundational in regards to your brand, will go a long way toward extending your reach and moving you up in the ever-present battle for search engine list recognition.

5 Things to Think About, Know and Understand When Google and Twitter Comes to Fruition

Here are the 5 items you need to think about, know, and understand when this collaboration comes to fruition, some say in as little as a few months time:

You know I love Twitter: it’s fast, it’s democratic, its content is not to be underestimated, but only 23% of adults actively use Twitter, so as a platform it has a ways to go to reach Facebook (71%) and still falls short of LinkedIn (28%).

So what should you do first? Get on Twitter and get ready, today!

Join my LinkedIn group, (click here!) we can help you with all these questions and more.