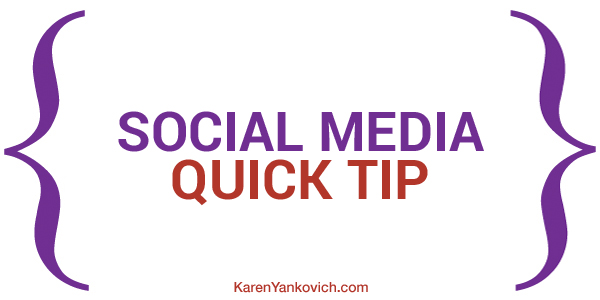 Periscope recently launched the ability to create your own Periscope channel. Now, I can direct people to periscope.tv/karenyankovich which is so cool, right?

When you direct people to this page, you can see the most recent posts that are still live. This is a post that I did right after the Periscope summit talking about whether people that were broadcasting were egotistical or just confident, but it’s a great way to send people to your Periscope page and to your scopes within that 24 hour period that they’re still live.

If you are not Periscoping, I’m telling you, I am fresh off the Periscope summit, and it was so energizing and inspiring to me, and I really think we’re going to see Periscope explode in the next few years, so get in on this.

Create yourself a Periscope channel. All you need to do is connect to Periscope with your Twitter account, download the app on your phone or your iPad, and just start watching other people’s broadcasts, but create your channel now. Grab your name, create your channel so that you’re branded, so that when you’re ready to broadcast your own scopes, you’ve got this already set up.

Periscope: do it, guys. Follow me! periscope.tv/karenyankovich. I’ll see you there!