How Social Media Won An Election And Shocked The World 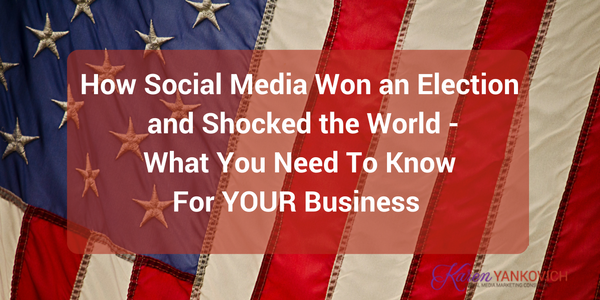 It’s been an interesting week here in the USA. Lots of emotions for sure.

Let’s take the emotion out for a minute and talk about some facts.

I’m not going to try to figure out how or why, but here’s what I DO know. Donald Trump spent less money on reaching his audience than any other candidate he ran against. Clearly though, he did reach them.

So what DID he do better than his opponents?

[Tweet “What did Donald Trump do better than his opponents? And how can it help YOUR business?”]

Extensive use of FREE social media.

It’s astounding. And we all missed it. The pollsters, the pundits, the media, and me. ME! The social media queen, the person who teaches businesses how to use social media to get free visibility for their business. I missed it too.

Sure, his opponents used social media. But it was careful and calculated. It was written like you would write a commercial for TV.

But not Donald Trump. Love him or hate him, he was REAL on social media.

One unique thing from this platform is that typically candidates have a staff that run their twitter pages for them. However, even though Trump did have a social staff, he frequently tweeted out his own statements.

His claims and statements on Twitter have been the center of his social media publicity.

Here’s an example. During the first debate, the most re-tweeted post from a candidate was Donald Trump’s, in which he claimed “global warming was created by and for the Chinese in order to make U.S manufacturing non-competitive.”

He basically discredited scientific proof that global warming is a real and serious thing.

Even though the majority of us know better than to believe what he said, this outlandish statement spread his face all over the internet. And the result was the funneling of more people to his page (supporters or not) just to see if the claims he makes are true.

Also knowing they came from his own words and not just some intern looking to stir up buzz made them that much more credible to his personality and political campaign.

Along with extensive Twitter use, supporting hashtags in this election played a great role in Trump’s continued exposure, which led to his win over the states.

Edelman, a leading communications and marketing firm, conducted hashtag research to analyze what effect social media had on the public vote. Their results concluded that Trump consistently out-performed Clinton on social media in the last 30 days leading up to the election.

Here are the key results to point out:

Political experts note that the few months and days leading up to election day are the most crucial to any campaign. Since support for Trump was able to successfully outperform Hillary on social media in these down to the wire days, the correlation between his win and support online is a key take-away for the importance of this free campaigning tool.

Domination in the Press

We all know Donald Trump’s tweets spoke to him as a person and what he believes will “Make America Great Again,” but his tweets also allowed him to gain coverage in the general media as well. And you know what they say, any press is good press, and his Twitter press increased his online presence by a landslide.

Never in an election have we been able to see news stories on television about “Presidential Candidate ___ ___ tweets so and so”, and gain EXTENSIVE news coverage over a 140 character statement. That is bigly.

Not only did he dominate the media in this form, but here’s an interesting statistic. 75% of the media coverage from his campaign was actually negative, compared to Clinton’s media coverage, in which only 56% was negative.

But what were the differences in their coverage?

Donald Trump’s negative media came explicitly from how HE was in general, based on the angry tweets, facial expressions and demeanor, while the majority of Clinton’s came from, you guessed it, Emailgate.

According to this, hardly any politically based media coverage even existed! The majority of coverage came from things you saw on Twitter and Facebook, from those angry tweets, the viral videos, the statements from people he worked with, etc. and not from his political stances on the problems he claimed was going to fix.

It was all from statements about HIM seen on social media that made it to the press and to the eyes of the voters.

Even though the media coverage was negative, his social support swung positive.

So how did this happen?

No one can say for sure. But from all this buzz created in both the news and social media, Trump aligned who he was, with his campaign, with social media, and America made him our new President elect.

So! What does this all mean for us other than a new President in the US?

As small business owners, we can learn from this. Social media can make a definite impact on exposure of your company.

Donald Trump got his name out there, created visibility, inspired his supporters and won the election through social media! He credited social media on his “60 Minutes” interview after the election..

Now, are we suggesting you tweet out ridiculous statements and gain negative attention, just to create buzz for your business? Absolutely NOT!

BUT, being true to the brand of your business and what you do is the essential part of creating exposure for your business, and if Donald Trump can fuel his national platform through Twitter, why can’t you?

Generate content that supports the values and ideals your business holds. If most of your business is local, make them feel special! Give them a shout out on Twitter or do giveaways to keep customers coming back and new ones coming in.

Check out my blog post on “7 Ways to Encourage Customer Loyalty” for more ideas on how to do this through Twitter.

So I’m going to gently nudge you.

We know that social media leads to more visibility.

We NOW know that unlikely results come in elections where candidates use cutting edge digital marketing.

What kind of results can YOU get for your business, using these cutting edge techniques? You’ve heard me say it a million times. You can STAY in business if you do this right and stay true to your brand.

You know I’m here to help. Let’s make YOUR BUSINESS great! Start here, with this free video series, and comment below if I can support you further.