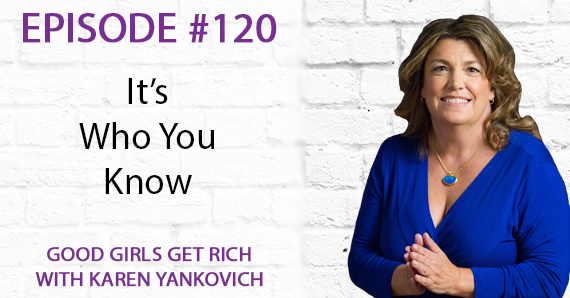 This week’s episode of Good Girls Get Rich is brought to you by Uplevel Media CEO and LinkedIn expert, Karen Yankovich. In this episode, Karen shares how to grow your network.

Virtual networking has never been more important. To grow and cultivate your network, start by taking a look at your first-, second-, and third-degree connections on LinkedIn.

We want to hear your thoughts on this episode! Leave us a message on Speakpipe or email us at info@karenyankovich.com.

Have you ever heard the phrase “It’s not what you know, it’s who you know”? I’m sure you have. And there’s a lot of truth to that saying. As we’re all navigating this unprecedented time in our lives, virtual networking has become more important than ever.

In-person networking still has its value, but while we’re under shelter-in-place orders, now is the time to take full advantage of virtual networking opportunities. And that starts by growing and cultivating your connections.

The first place to start when virtual networking is to look at who you know – your first-degree connections! Find the people you’re connected with that you meant to follow up with but never did. Then start a warm, heart-felt conversation with them. Remember, this isn’t a sales pitch!

The next step in growing your network is to take a look at your second-degree connections. How do you know these people? Maybe you’re part of the same in-person network. Maybe you know them from high school or college. Perhaps you’re even both members of the same business group on Facebook.

Find the people you can relate with and start connecting with them. Keep in mind, you don’t want to connect with just anyone and everyone. Make your connections targeted.

I want to see you succeed. As we’re all weathering this COVID-19 pandemic together, virtual networking is the tool that will help you grow your business in stressful times.

Resources Mentioned in the Episode:

Help Us Spread the Word!

If this episode has taught you just one thing, I would love if you could head on over to Apple Podcasts and SUBSCRIBE TO THE SHOW! And if you’re moved to, kindly leave us a rating and review. Maybe you’ll get a shout out on the show!

Intro 0:06
Welcome to the Good Girls Get Rich Podcast with your host, Karen Yankovich. This is where we embrace how good you are, girl. Stop being the best kept secret in town, learn how to use simple LinkedIn and social media strategies, and make the big bucks.

Karen Yankovich 0:23
Hello, I’m your host Karen Yankovich. And this is Episode 120 of the Good Girls Get Rich Podcast and we’re brought to you by the She’s LinkedUp Accelerator Program where we teach simple relationship and heart based LinkedIn marketing to women. We get you on the phone consistently with people that can change the course of your business and your life and your career forever. People who you can’t wait to have the opportunity to chat with and this episode is gonna tell you exactly why that’s so important. We basically teach digital marketing with the human touch so you know that if you listen to for if you’re loving what you’re hearing today, we love to hear from you. So you can subscribe to this podcast, wherever you’re listening, take a quick screenshot of the show. Right now while you’re listening and share it on social media tag me, I’m @karenyankovich, use the hashtag #goodgirlsgetrich, and that allows us to see it and we can then share your post with my audience. And that’s how we will get more visibility. We have a link to Speakpipe in the show notes where we can get your audio reviews. So you can leave us an audio review there. Just give us a chat and let us know who you think we should have as a guest or topic you’d love to hear us speak about that link is in the show notes at karenyankovich.com/120. That’s where you’ll find the blog for this page where you’ll see all the other links we talked about and all that all the good stuff that you want to follow up on.